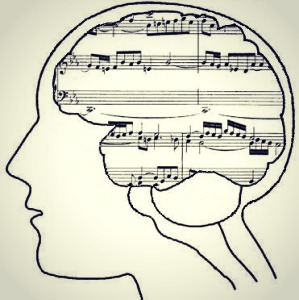 Even though I'm a songwriter, there have been many times when I've written a poem specifically and the feedback I've received is that it seemed lyrical. "You should write music to that and make it a song."  That's a good feeling. Perhaps it's a subconscious thing that occurs naturally when I write from years of doing what I do and from listening to music incessantly while studying the album and later, the CD lyrics and liner notes.  Remember that? It made the experience so much richer to sit down and really listen to the lyrics while reading along.

It's a good exercise to try; sit down with your favorite album and pull out the lyrics and really listen. Pay attention to the rhythm of the words and how they work with the music. When you sit down to write your own poetry, you might find that you'll hear it in your head differently. Maybe a line will come to you in a more musical incarnation. I can't think of a better example than Bob Dylan. There is a wealth of material there that stands alone as poetry and the way he weaves his lyrics into song is sometimes unconventional, which lends itself to a teachable poetic lesson. Leonard Cohen, Joni Mitchell, the aforementioned Suzanne Vega...all are prime examples and that's just in the folk genre. Perfect examples can be found in any genre - even and especially rock. Patti Smith is first and foremost a poet. Her poetry books, such as Auguries of Innocence, are collections of beautiful, ethereal prose.

Every time that I look in the mirror
All these lines in my face get me clearer
The past is gone
It went by like dusk to dawn
Isn't that the way
Everybody's got their dues in life to pay
Recognize that stanza? It's from Aerosmith's "Dream On'. I've always thought that song was particularly poetic.
So give it a try - think lyrically. See what beautifully poetic music comes to mind.
For more musical reminiscence, I invite you to visit the new website that Jen Kehl of My Skewed View, Lance Burson of My Blog Can Beat Up Your Blog and I have launched called Raised On The Radio. It's entirely dedicated to the music and lyrics we grew up listening to on the radio.  Stop on over and get your creative juices flowing.
Posted by Morgan Dragonwillow at 12:00 AM