I am going to share with you today perhaps the most important poetry writing – and life living – tip for any person on a creative journey.
It is so simple I am concerned you might overlook it. Please, please, please consider it and even if you are an expert in this area, look at it today as a beginner. I guarantee you will get something out of it.
Poetry & Writing Overall Tip #9 - Be more alert to life as you pass through it.
See what I mean?
It is so simple!
So simple it deserves an example from my daily drive. First, I drive from my home to a part of town about 7 miles away several times a day. If you’ve known me for long, you know I don’t particularly care for the whole “Momschlep” routine. In fact, I don’t care for it at all so I’ve created ways to make it more interesting and make my creative side feel productive.
So one of the ways to combat that is to drive to the same place using different routes with an intention of ALERTNESS TO THE VIEW as I drive and in doing so, I consistently catch new sights, sounds, scents and new images to put into my poems and other creative projects.
One of the routes I drive is to take a less-than-main street through downtown Bakersfield. For years I drove 24th Street, which is actually a part of the main highway through town. It connects the Kern River Valley with Southern and Northern California.
Not long ago on a whim I decided to take 21st Street instead which has a lower speed limit, but I thought the relative quietness and lack of streetlights on the street might make it faster.
It did exactly that. AND it awakened me and my creative eye. 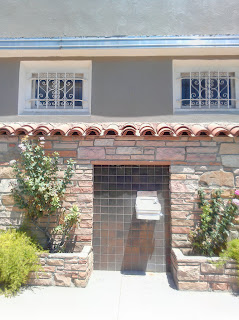 One day I was driving west and my eyes flashed on… a drinking fountain outside a sandwich shop?
Really?
All this time I have lived here in Bakersfield and seen that sandwich shop and I never noticed an outdoor drinking fountain in a lovely setting of tile and flowers?
How long has THAT been there and I didn’t notice, I wondered.
I decided the next time I came by I would take photos. My curiosity has arisen. It doesn’t work any more, but I imagine it has been there since the 1950’s. I imagine what the street must have looked like then. I close my eyes and breathe in the warm air and images float up to meet me.
Just this week something else happened on the same road.
I was driving along and looked over to one of my favorite old houses on my route. My eyes tilted up and I saw there had been a fire on the second floor and up through the roof. I love old houses, oh, how I love them. Later that evening I went there specifically to take photos. 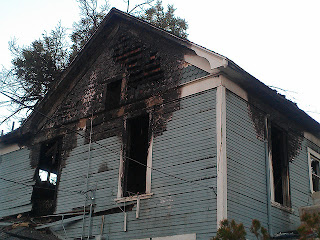 The fresh smell of fire still hung heavy in the air.
I felt sick as I tried to get some good “storytelling” photos. I was quite moved. I walked with my head down toward my car and I saw something unusual. Something broken, on the ground, a ceramic pineapple? Pieces of a ceramic pineapple?
I picked it up and put it in my bag.
Later that night I asked a gentleman at a downtown coffee house, “Do you know what happened to that house on the corner of F and 21ststreet? There was a fire?” 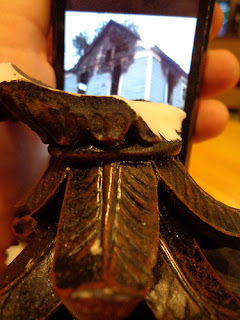 He answered, “The blue house? I don’t know exactly, but I do know there was a stand-off last night in that area.”
The next day I googled “Stand-off F 21st St Bakersfield” and was taken to a news report which told me, I’ll summarize, a man had been throwing things out his second story window and breaking things. One of the other residents in this house turned into 8 apartment building called the police. When the police came, he refused to come out.
Eventually he backed down and came out, but not before he lit something on fire outside the apartment. As the officers were dealing with him, they noticed the fire. They called the fire department but before the firefighters arrived, the second story went up in roaring flames.
The man apparently had a history of setting fires.
And now I have, I am guessing, some pieces he left behind.
Does that sound like roots of a poem or what?
All because I was ALERT TO LIFE as I drove around town.
Make this into a practice until October comes along. Take notes of the ordinary stuff. Get up close and personal. Get out of your car. Touch, sniff, take photos or write word pictures. Allow yourself to be romanced by the everyday wonders in (what you will never again call) your ordinary life.
Be more alert to life as you pass through it.
Have you taken the time to officially register for OctPoWriMo yet? I encourage you to pop over to the Link Up Page to Register.
Finally, a couple handy links that are... related somewhat to this tip. The 10 Simple Mindfulness Exercises will definitely prime you to paying attention differently. And how could I not include John Cleese talking about Creativity? ENJOY and SEE YOU TOMORROW!
10 Simple Mindfulness Exercises
4 Lessons in Creativity from John Cleese
Posted by Morgan Dragonwillow at 12:12 PM