Anger, frustration, sadness, joy. Before you log on to Facebook and pour your feelings out onto your status update, think about how you could channel them into a poem that can be preserved as an artistic expression with perhaps a more timeless appeal than "this is how pissed I was on Tuesday". You could even throw in a little poetic symbolism for good measure.

Believe me, it's something I want to do regularly. And it doesn't take too much more thought than it would to put it out there on Facebook. In fact, wouldn't it be cool if more of us took a more poetic approach to our status updates? Fun, right?

The doctor's office, 8am
I'm right on time, but he's late again
Why does the receptionist admonish when I'm running behind?
It's as if they only value their precious time
It's about adding a little flair to the same old recitation of "Waited in the doctor's office for 45 minutes. Again. How come it's okay for them to be late, but not me?
I think I'll try it today.
Take THAT, Zuckerberg! 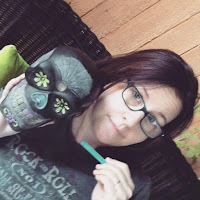 Linda Roy is a writer, singer/songwriter/musician whose humor blog elleroy was here mixes funny with a soundtrack. She is the founder and lead singer of the Indie/Americana band Jehova Waitresses and her writing has been featured at The Huffington Post, Scary Mommy, Erma Bombeck Writer's Workshop, Humor Outcasts and In the Powder Room, among others. She is a 2014 BlogHer Voice of the Year recipient and has contributed to several anthologies, including the third book of the New York Times best selling "Pee Alone" series, I Still Just Want To Pee Alone. Connect with her on Facebook, Twitter, Pinterest and Instagram.
Posted by Morgan Dragonwillow at 12:00 AM