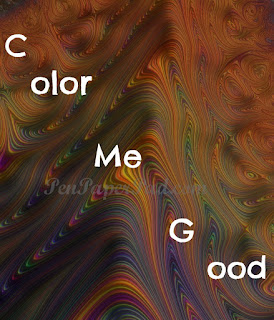 Two questions: One do you remember a R&B group from the 90s called Color Me Badd? I'm going to guess probably not, but now you know why the name of this post. Two: Did you know in the United States, often in hospitals the patient rooms are blues and blue-greens? It's because those muted shades promote the feeling of tranquility. Now that I think about it, I had a lot of classrooms with those colors also. I don't think the trick works as well with young kids, who may be a little hyper active.

I'm sure you've noticed it as well. Certain colors may make you happier when you see them. Maybe dark blue reminds you of your Aunt Tilda's dining room curtains. That's where you'd always eat supper when you visited as a child. It was one of your favorite childhood memories, because she always made the best dinner.

Write a poem talking about a color and your memories attached to it. Bring us along for the memory's journey.

Remember, the prompts are just an option.

Tamara Woods was raised (fairly happily) in West Virginia where she began penning poems after a boy broke her heart. She shares poetry, short stories and writer interviews on her blog, PenPaperPad. Her writing has been featured in Mamalode, In the Powder Room, and many others. She is the editor for The Reverie Journal, which will be releasing it's first poetry collection early October. She also hosts #writestuff TweetChat where writers talk about writing every Tuesday at 9 pm EST. She is a hillbilly hermit living in Honolulu with her Mathmagician.
Posted by Morgan Dragonwillow at 12:00 AM