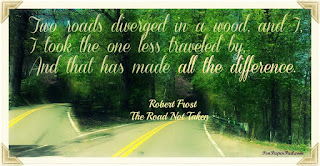 Apparently, we're very reflective here at OctPoWriMo. Thinking about the poem, "The Road Not Taken" and yesterday's prompt, let's try something out. Instead of writing about something that is different, a time when you wish you were brave, let's talk about something you wouldn't change. You did it and you're happy that you did. It could be a success or a failure. Perhaps a choice that others may perceive as a failure, but you know it was the best choice for you. Perhaps you took the road less traveled and it was a success for you.
Word Prompts
roads
traveler
passing
day
difference
Remember the prompt is just a suggestion!

Tamara Woods was raised (fairly happily) in West Virginia where she began penning poems after a boy broke her heart. She shares poetry, short stories and writer interviews on her blog, PenPaperPad. Her writing has been featured in Mamalode, In the Powder Room, and many others. She is the editor for The Reverie Journal, which will be releasing its first poetry collection early October. She also hosts #writestuff TweetChat where writers talk about writing every Tuesday at 9 pm EST. She is a hillbilly hermit living in Honolulu with her Mathmagician.
Posted by Morgan Dragonwillow at 3:00 AM