OctPoWriMo and Growing as a Poet - A Profile of Sara Teasdale


When I first started writing poetry, I didn't read much poetry at all. It wasn't until I began maturing as a poet that I gained the confidence to not only read the work of past poets, but to study them in order to come to know more about poetry as an art form.

Discovering the lives of women poets who have lived before me has been particularly inspiring to me, so much so I started a series of profiles of women in literary history.

I don’t remember when exactly I fell in love with Sara Teasdale. I think it was during the era when I was being haunted by Edna St. Vincent Millay. (A brief aside: Later in September, I will write of recent visit to her home in Austerlitz, New York.)

For now, we will focus on Millay's lyrical contemporary, Miss Sara Teasdale.

She was born in 1884 in St. Louis, Missouri. She was unhealthy as a child so she didn’t start school until she was nine-years-old. She came from a wealthy family who was able to both provide for her and take care of all her needs. She went to the prestigious Hosmer Hall, an all girls school in St. Louis.

Teasdale created a women’s literary society with some of her teen friends which they called “The Potters.” They even published their own literary journal The Potters Wheel where Sara received her first publishing credits.

She looked to several different poets as well as actress Eleanora Duse as role models and inspiration for her writing. Among her favorites were Christina Rossetti, Mary Robinson and Emily Dickinson.

She won the Pulitzer Prize in 1918 (which was then called Columbia University Poetry Prize). Today’s readers might find her early twentieth century style out of flavor. I ask you read it as if it was just written today.

Hold the words lightly and see what these words written one-hundred years ago by a young, inspired poet may teach you now.

It is Not a Word

It is not a word spoken,
Few words are said;
Nor even a look of the eyes
Nor a bend of the head,
But only a hush of the heart
That has too much to keep,
Only memories waking
That sleep so light a sleep.

Faults
They came to tell your faults to me,

They named them over one by one;

I laughed aloud when they were done,

I knew them all so well before,—

Oh, they were blind, too blind to see

Your faults had made me love you more.

I have remembered beauty in the night,

Against black silences I waked to see

A shower of sunlight over Italy

And green Ravello dreaming on her height;

I have remembered music in the dark,

The clean swift brightness of a fugue of Bach's,

And running water singing on the rocks

When once in English woods I heard a lark.

But all remembered beauty is no more

Than a vague prelude to the thought of you --

You are the rarest soul I ever knew,

Lover of beauty, knightliest and best;

My thoughts seek you as waves that seek the shore,

And when I think of you, I am at rest. 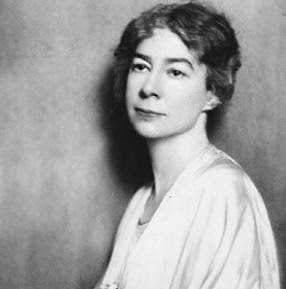 Many of her lyrics are love poems inspired by two men: one she married (Ernst Filsinger) and one who adored her and ended his life with suicide in 1931 (Vaclev Lindsay).She divorced Filsinger, who offered financial stability in addition to her wealthy family, in 1929. Some sources say it is her seven year friendship with young poet Margaret Conklin that caused the marital split.

On January 29, 1933, Sara Teasdale followed other creative people including her one-time love, Vaclev Lindsay, into suicide. She overdosed on barbiturates and climbed into the bathtub, yet another tragedy upon yet another creative woman.

* Parts of this blog post were originally published as a part of the Literary Women from A to Z series in 2012.
-- Julie Jordan Scott is a creative life coach, award-winning story teller, actor, director and Mommy extraordinaire. Read more of her inspirational writings at her blog, Julie Unplugged, and watch for the grand opening of her new blog in Mid-September.

Make sure you sign up to receive our updates, tips and prompts to share in all the poetry fun!